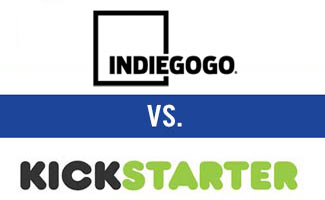 Crowdfunding takes the “crowd” element that has been applied to many Internet-based ventures (such as cloud computing, online petitions, etc.) and applies it to the funding of dreams and projects that would not be able to raise the needed funds with just typical, local connections.

We compare two of the leading crowdfunding platforms, Kickstarter and Indiegogo, and give you the pros and cons for each, so you can maximize the chances that your project will get funded.

Why Use CrowdFunding For Your Idea?

The purpose behind crowdfunding is to tap as many people as possible and gather many small donations that add up to a significant amount in aggregate. Crowdfunding sites such as Indiegogo and Kickstarter enable young entrepreneurs, inventors, artists, filmmakers, and others to fund their projects by accepting monetary contributions from anyone. Unlike venture capitalists, in return for their equity, contributors get to be part of the project in one-way shape, or form.

Depending on the donation amount, contributors are given various tokens of appreciation, which can range from signed copies of a book to credits in a film to personalized fishing trips by the project owner.

The crowdfunding space is crowded (literally), as there are estimated to be literally thousands of crowdfunding platforms trying to get in on the game (some names you might recognize: ArtSpire, RocketHub, CrowdRise, ArtistShare, FundAnything). Why? The platform that offers the service can charge a commission for hosting the project and funding platform, and with enough traffic, this business model can be quite lucrative.

The list of competitors in this space is nearly endless and is growing every day. But there are only a few players that have enough traffic to create an effective marketplace. It’s also worth noting that crowdsourcing platforms target different niches, from art and film to disaster relief and other non-profit industries.

The two platforms we’re comparing in this article, Indiegogo, and Kickstarter, are the leaders in their space and they’ve also been around longer than most of their competitors.

Indiegogo and Kickstarter are two of the largest and most successful crowdfunding sites on the Internet today. While Kickstarter is currently the larger of the two, it differs in its review criteria (more stringent), project acceptance (Indiegogo will accept any project), as well as fee structure and funding goals.

Indiegogo is completely free pre-launch, then has a 5% platform fee plus 2.9% + $0.30 transaction fee for credit cards.

In the reviews below, we outline in more detail the differences as well as pros and cons between the two crowdfunding services.

Indiegogo operates from its base in San Francisco and 2018 was its most successful year to date with 1,300 inventions translated from ideas to shipped products. Indiegogo launched in January of 2008 at the Sundance Film Festival, approximately a year after Kickstarter, which at this point had a significant head start. Initially, Indiegogo focused exclusively on independent films, hence the name Indiegogo. A year after launch, however, Indiegogo started accepting projects from any category, most likely in an effort to compete with rival Kickstarter.

What’s The Largest Project Ever Funded On Indiegogo?

Indiegogo’s largest project at the time of writing is the Flow Hive, which had a target of $70,000 but ended up raising a whopping $13,289,097. The Flow Hive is a beehive designed to allow honey to be extracted simply by turning a lever: the hive does not have to be opened and the bees are not disturbed as in normal extraction.

Kickstarter, headquartered in Manhattan, launched on April 28, 2009. As of June 15, 2022, the success rate of fully funding a project on the crowdfunding website was 39.66% according to Statista. So far, over 6.57 billion U.S. dollars have gone into successfully launched projects (projects that reached their goal and were funded).

What’s The Largest Project Ever Funded On Kickstarter?

The largest Kickstarter project funded at the time of this writing is Surprise! Four Secret Novels by Brandon Sanderson ($41,754,153 raised), a series of four science fiction/ fantasy novels by star author Brandon Sanderson. This is not counting the success of the raise for the video game Star Citizen (over $457,000,000!), but the vast majority of that came from the game’s website itself.

Harvest is a feature film by local North Carolina filmmaker S. Cagney Gentry that raised $15,682 from 166 backers. It had been a lifelong dream of his to make this film a reality, and the Kickstarter campaign helped make it happen. “Harvest explores the life of an aging mountain man who finds himself haunted by the specters of a changing world.”

Fundraising for Harvest was based on Kickstarter’s reward system. Rewards for contributing to this film included signed posters and DVDs, production notes and photos, and at higher levels a guided fly-fishing trip, Associate Producer credit on the film, and a 4-course, Southern-inspired, home-cooked dinner for up to 6 in your home. This gives you some ideas as to the types of rewards you can offer with your crowdfunding initiative.

The JOBS act was signed into law by President Barack Obama on April 5th, 2012. Its significance? You may have noticed that both Kickstarter and Indiegogo operate primarily on a rewards type of system, instead of offering equity in a venture. The JOBS act effectively allows crowd-funding sites to offer equity in exchange for contributions to projects. This could make fundraising not only a lot more appealing to investors, but it could also help significantly increase the pool of funds available to entrepreneurs. The one criticism of the JOBS act currently is that it requires audited statements for projects that raise more than $500,000. This is a headache that may put a cap on the kind of fundraising that takes place.

Nevertheless, crowdfunding site Fundable is taking full advantage of the JOBS act and is offering both awards and equity-based funding.

Need A Good Product Name For Your Next Crowdfunding Campaign?

Got a great idea but struggling to come up with a name for it? Check out our how to name your business guide for startups and entrepreneurs.